As we entered the second half of our tour, we drove up to the beautiful Hotel Adria in Dubrovnik, Croatia. Just when I thought that the scenic eye candy had to have peaked in Montenegro, the view from our hotel easily took the cake. Overlooking the beautiful blue waters of the port of Dubrovnik, our hotel had my jaw lying on the floor.

The view from Hotel Adria

We immediately departed for Dubrovnik’s Old City, which many of you Game of Throne-ies might recognize as King’s Landing. As we approached the walls, I understood immediately why the minds of HBO felt that this was the perfect set. This medieval fortress was simply mind-blowing. Walking over the drawbridge made me feel like I had traveled back in time. Completely surrounded by medieval defenses and the crashing waves of the Adriatic Sea, it was no wonder that many thousands of people joined us in our hunt for the perfect picture on this picturesque day. We had the pleasure of walking along the tops of the walls, eating at the city’s finest restaurants, and then dancing in the main court through the sunset. One of the greatest highlights of this trip so far for me was kayaking along the edges of the walls the next day, feeling as if I were an enemy ship about to take the city by storm. 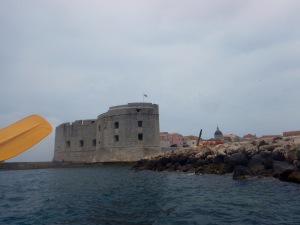 Our concert yesterday took place in Trebinje, Bosnia: a small and quiet town about an hour away from Dubrovnik. Hidden in this small town was one of the most beautiful cathedrals I had ever seen. While the Cathedral of the Transfiguration was small, it was also quite mighty. Never had I seen such large murals covering every possible inch of the walls. The space looked and sounded beautiful. This concert was one of my favorites thus far, for I could feel the difference in the audience who came from a town of thirty one thousand people rather than a city of millions. It was a rather humbling experience, and I intend to take the priest up on his offer of returning someday.